1918 Pandemic in Meeteetse and Park County: Part III Not “Business as Usual”

For our next post in this series on the 1918 pandemic in Park County, we focus on how life goes on or is paused during an epidemic.

Politics continued through the influenza pandemic (just like they did during the 2020 election). A political ad in the Northern Wyoming Herald on October 30, 1918, against the candidate Osborne made various claims about the man not working for the common good. Among several disputes on Osborne’s record as governor, representative in Congress, assistant secretary of state, and a 30 year residency in Wyoming, the author claimed that “Osborne is a doctor by profession, but he has failed to respond to the call of his chief, President Wilson, and the public health service to help stay the scourge of Spanish Influenza, but has continued his political campaign in Wyoming while his opponent, Senator Warren, is attending to the needs of the nation in these strenuous war times at Washington.”  In the same issue, candidate L.R. Ewart suspended his in-person campaign and opted instead to put his platform in the paper.

Holidays were put on hold. No parties were allowed and “Thanksgiving dinners are somewhat lacking when no company is present” but this was the case under the state and county board of health orders due to the number of cases (Park County Enterprise, November 27, 1918). We are lucky in that our distanced holidays could at least include Skyping or Zooming with family and friends to see each other instead of just talking on the phone.

The Local News sections of older newspapers sometimes functioned like gossip columns or even the “social media” of the day. One rather heart-warming account in the January 3, 1919, issue of the Meeteetse News mentions Al McGuire making a night trip to Coyote Canyon to deliver medicine to the Todd family, who all had influenza. Another note announced the recovery and return to work of one of the postal clerks, a Mrs. Jeenie [Jeanie] Harris. There is also a reminder in the issue that slight improvement does not mean the individual should just go back to “business as usual,” since it will likely trigger a longer relapse and needed rest period:

A number of the influenza patients hereabouts have had serious backsets during the week owing to their eagerness to be up and doing. The disease is a peculiar one in this respect, as it needs just so much time to run its course, and he who would venture forth upon a slight feeling of betterment has generally to pay dear- [torn] it. Better to remain in, keep [torn] and quiet a few days longer than to return to the sick bed a second time.

The Local News section on October 23, 1918, in the Park County Enterprise reminds readers of the current prohibition against public meetings (in Cody) and remarks on “the many funerals [that] are being held privately.” This same article discusses a family who came down with influenza after traveling and exposure; a daughter and her children came from Delaware after hearing of a death in the family here – they caught influenza in Billings and remained there for a week. This section goes on to discuss that “It is felt that influenza is on the wane in Cody and vicinity. The change in the weather will be of great help and people are [a]ll consistently working together in order that the terrible and insidious disease may be eradicated.” 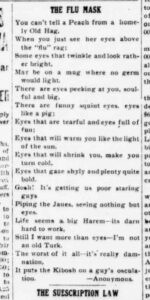 “The Flu Mask” published anonymously in the Meeteetse News on March 28, 1919.

Ministers and priests can be counted among front-line workers, providing help and comfort, sometimes to their cost. One such minister, Rev. A.R. Chalmers, and his wife caught influenza, likely while presiding over funerals. Meeteetse ladies sent food packages up to Cody for them (Northern Wyoming Herald, November 27, 1918).

A public health notice (published interestingly back on page 8) in the Northern Wyoming Herald on January 15 reminded the public that the ban on dances (public and private) was still in effect since dances had proven to be one of the most prolific sources of contagion. Frances M Lane, MD, county health officer, reminded readers that anyone violating the order “would be dealt with according to law,” which could be severe if you remember from the Rules and Regulations post.

A notice on page 8 of the Northern Wyoming Herald on December 18, 1918, announced that the Park County Library opened on Monday and the hours would be limited to afternoons, 1 – 5:30 pm.   No fines would be charged for overdue books while the library was closed but all books must be returned by January 1st to not incur a fine when regular fines resumed in the new year. There are instructions for how to return books when influenza was in the home: “Where there has been influenza in the home, please bring books securely wrapped and they will be fumigated before placed in circulation.” You might remember the Park County Library taking similar isolation and fumigation measures on items in circulation during COVID-19.

An author in the October 23, 1918, issue of the Park County Enterprise discussed how even with no public gatherings, fundraising could succeed. The Fourth Liberty Loan campaign was brought to a successful close even though “There was no chance to build up public sentiment as heretofore and the amount raised was by far the largest ever known – but the hard-working officials put the loan over just the same.”

In April 1919, the Northern Wyoming Herald announced that the school directors closed school for a week. Later that month, the paper reported that parents in the capital city were arguing against having Saturday morning sessions for the children to make up missed class, claiming it was too hard on students. Even then, how to safely reopen schools (and make up for lost teaching time) was an issue.

We end this post with a reprint of a poem entitled “The Flu” by J. P. McElroy, published on page 4 of the April 30, 1919, issue of the Northern Wyoming Herald.

When your back is broke and your eyes are blurred,

And your shin bones knock and your tongue is furred,

And your tonsils squeak and your hair gets dry,

And your doggone sure that you’re going to die,

But you’re skeered [sic] you won’t and afraid you will,

Just drag to bed, and have your chill,

And pray the Lord to see you through

For you’ve got the flu, boy,

You’ve got the flu.

When your toes curl up and your belt goes flat,

And you’re twice as mean as a Thomas cat,

And life is a long and dismal curse,

And your food all tastes like a hard-boiled hearse,

When your lattise [sic] aches, and your head’s a-buzz,

And nothing is as it ever was,

Here are my sad regrets to you –

You’ve got the flu boy,

You’ve got the flu.

Ask me brother, for I’ve been through

It is by misery out of despair;

It pulls your teeth and curls your hair,

It thins your blood and brays your bones,

It fills your craw with moans and groans.

And sometimes, maybe you get well.

Some call it flue – I call it hell!