A Place to Call Home: Amelia Earhart in Meeteetse

A Place to Call Home: Amelia Earhart in Meeteetse
by David Cunningham 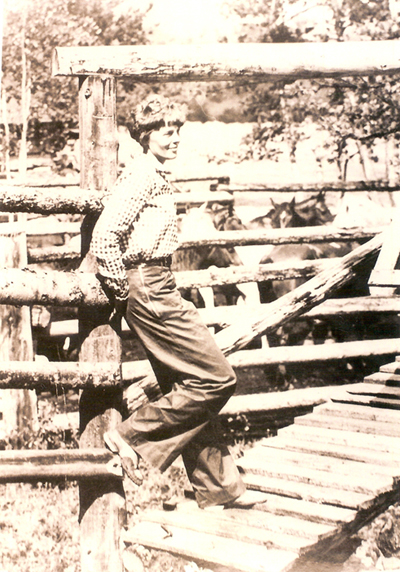 In 1934, legendary aviatrix Amelia Earhart loaded up her car back east and, with her new husband, publisher George Putnam, began driving her way across the country. They were heading for Meeteetse, Wyoming, and the Double Dee Guest Ranch where they planned to meet up with Carl Dunrud, Putnam’s friend. Dunrud owned the Double Dee and would host the couple during three weeks of fishing and camping in the high mountains.

Putnam and Dunrud shared a long history of adventures together. Dunrud served as Putnam’s hunting guide and outfitter in Yellowstone and accompanied Putnam on a specimen collecting expedition to Greenland in 1926. After Putnam and his first wife divorced, he married Amelia Earhart at the height of her fame. Amelia arrived at the Double Dee in July and spent many days fishing, riding, and exploring the area of the Kirwin Mining District with Dunrud.

When Carl Dunrud purchased the defunct mining area, it already included the former gold mining town of Kirwin, which was located on the Wood River at 9,200 feet, and once boasted 200 residents, a hotel, general stores, and assorted mining structures. The town was abandoned for good in 1907 following a deadly avalanche. Dunrud’s plan was to buy what remained of Kirwin and the District so he could establish a dude ranch nine miles downriver. This he did. The newly-established Double Dee Guest Ranch had a lodge and over a half a dozen cabins where guests could stay while enjoying nature and seclusion. The cabin in which Amelia stayed is still standing and visitors may go inside and explore.

During that July in 1934, Amelia developed a very close friendship with not only Carl Dunrud, but with his family. In fact, she would later send Christmas presents to them. One gift she gave Carl was her famous trans-Atlantic flight jacket. She also gave him a buffalo robe that cowboy star Tom Mix had given to her. She said that Carl probably needed it more than she.

Amelia loved the Kirwin area so much and the escape it provided her that she and George Putnam arranged for Carl to build her a summer cabin about a mile upriver from Kirwin. Putnam communicated the dimensions and other instructions to Dunrud in a series of letters. Construction began in 1937. The structure was only four logs high, however, when Putnam called Dunrud and told him to stop building, as Amelia was lost at sea. Today, only a few logs remain, but visitors still make the short trek to the site where Amelia was planning to live during the summers.

The Shoshone National Forest now owns the area. The plan of the SNF is to continue its stabilization of structures at both the Double Dee Guest Ranch and the ghost town of Kirwin. Visitors are welcome to explore the open buildings at both sites and to imagine Amelia Earhart with a smile on her face, enjoying the cool mountain air beside the Wood River.