Many celebrities come from very small towns but still succeed. While coming from a small place can present obstacles to anyone’s career, success mostly comes down to an individual’s talent, connections, and drive. 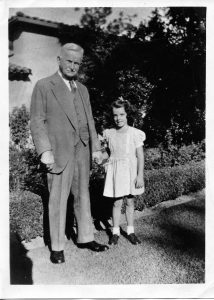 Martha Sleeper’s life is an example of this. Born during 1910 in Illinois, Martha and family soon moved to a sheep ranch along the Greybull River just northeast of Meeteetse, Wyoming. The ranch was earlier owned by the M. J. Sears family during the first decade of the twentieth century. The re-named “Sleeper Ranch” was where Martha spent her very early years. Here she was surrounded by the soothing sounds of sheep, but also great herds of mule deer, antelope, and elk. Although she lived in this extremely remote area (not far from Yellowstone National Park), it was almost fated that young Martha would have a career in the newly developing film industry.  Afterall, her father, William B. Sleeper, was an official of the Keith-Albee-Orpheum vaudeville circuit in New York, while her uncle, John Murdock, was the head of that organization. It was Murdock who had the greatest impact on Martha’s career.

Due to her father’s health problems, Martha’s family traded in the sweet aroma of sagebrush and long cold winters for the warmth of Los Angeles, moving from their Wyoming ranch in 1923 when Martha was 12. Her acting career immediately took off. In that year she made her first 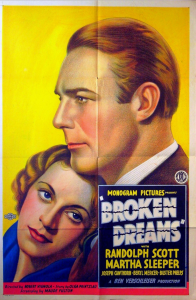 screen appearance in The Mailman, an independent production. At age 14, she was signed by the famous Hal Roach Studios to appear in the Our Gang series. After quickly “outgrowing” that production, which featured child actors, she played in Hal Roach comedies opposite the most popular male stars of the day, including Stan Laurel of “Laurel and Hardy” fame. After leaving the Roach Studio, she starred in six silent movies for the FBO studio during 1928 and 1929. At this point, sound was added to movies, which meant that actors now had to “speak.”  Martha was signed by MGM and joined their actors training program.

From 1930 to 1936, Martha Sleeper played roles in melodramas opposite stars such as Randolph Scott and Spencer Tracy. Unfortunately, Martha was type-cast as the “society snob” who ultimately lost her man to the film’s leading lady. Disappointed in these limiting roles, she began performing onstage. With her husband, Hardie Albright, Martha left Hollywood for New York and during the 1930s and 1940s, she found success on- and off-Broadway.

Sleeper had talents other than acting. During the 1930s, while living in New York, Martha began making whimsical costume jewelry for herself. Many of these pieces were of deer and other animals, which she would have encountered daily as a child in Wyoming. Her friends, of course, wanted similar pieces made for them and Martha again found herself at the forefront of another new American movement – the gadget jewelry fashion craze. Soon, she found a company to manufacture her designs, which were sold in department stores around the US.  Many of her pieces were made using a material called “Bakelite.” These Bakelite pieces are very collectible today. 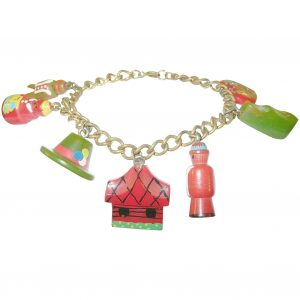 Nothing lasts forever and Martha eventually tired of the jewelry business. In 1949, she and her second husband moved to San Juan, Puerto Rico, where she began designing women’s clothing and resort wear. She sold these creations at her boutique in Old San Juan. A very talented designer, Martha won numerous awards and commissions from large corporations for her unique clothing designs.  She operated this boutique until 1969. In that year, she married for a third time, gave up her design business, and moved with her husband to Beaufort, South Carolina. Martha died there in 1983.

Despite her start on a remote sheep ranch on the Greybull River near Meeteetse, Martha Sleeper’s life shows that talent and personal drive create opportunity. While she began with very beneficial connections to the early film industry, her later accomplishments prove that re-inventing oneself is always possible. Where we grow up does not totally define us; it, however, always plays a role in who we become.