Meeteetse, Polar Bears, and the State Vessel of Massachusetts

December 9, 2020 by Fig in Uncategorized

Meeteetse, Polar Bears, and the State Vessel of Massachusetts 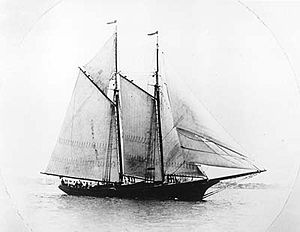 Few American marine vessels were as significant as the schooner Effie M. Morrissey. Now named the Ernestina-Morrissey, she not only made many scientific expeditions to the Arctic during the early 1900s with Captain Bob Bartlett at the helm, but even surveyed the Arctic for the US Government during World War II. But why is this important to Meeteetse history? In 1926, Carl Dunrud, the future owner of the Double Dee Guest Ranch near Meeteetse, accompanied Captain Bartlett on the famous schooner during the 1926 scientific expedition to Greenland. He was mainly along to be filmed roping polar bears, riding a musk ox, and roping a walrus. Most of this he got done!

Designed by George McClain of Gloucester, Massachusetts, the Effie M. Morrissey launched February 1, 1894.  Her first skipper was William Edward Morrissey, who named her after his daughter Effie Maude Morrissey. The Effie M. Morrissey fished the Grand Banks out of Gloucester for eleven years, then, in 1905, was sold to Captain Ansel Snow, who used her to fish out of Digby, Nova Scotia. In 1914, Harold Bartlett of Brigus, Newfoundland, bought the Morrissey, which he used for fishing and as a coasting vessel along the shores of Newfoundland and Labrador.

In 1925, Harold Bartlett sold the schooner to his cousin, Captain Bob Bartlett, the well-known Arctic explorer. Captain Bartlett and the Morrissey immediately started a two-decade’s long period of Arctic exploration. These scientific ventures were financed by the well-known publisher George Palmer Putnam, the future husband of famous aviatrix Amelia Earhart. 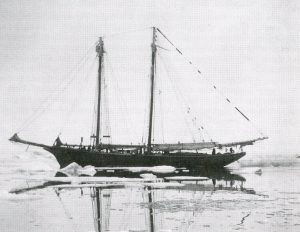 The Morrissey on the Greenland Expedition in 1926.

The first major scientific voyage under Captain Bartlett’s ownership was the 1926 Expedition to Greenland. The expedition’s goal was to collect plant and animal specimens for the American Museum of Natural History and to provide transportation for the research team of University of Michigan Professor William Hobbs. This trip was financed by George Putnam, who with his young son, David, sailed on the expedition. Carl Dunrud, who had not yet moved to the Meeteetse area, played a major role in this journey.

Why was Carl Dunrud along? After all, he was no sailor. The reason was that Dunrud had served as George Putnam’s outfitter while working in Yellowstone Park.  Because he knew Dunrud’s many and varied abilities, Putnam asked Carl to join the expedition. He would be no slacker! Prior to sailing, Putnam put Dunrud in charge of purchasing supplies. But he would have an even more important role: the newsreel company, British Pathe, was aboard and Putnam wanted Dunrud to be filmed capturing polar bears and a walrus. He wanted him to ride a musk ox, as well. Putnam was always thinking of “promotion” and Carl, the “do it all” cowboy outfitter, would be valuable in this endeavor. 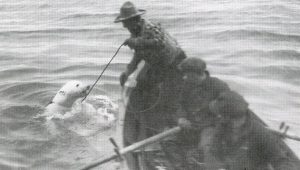 Carl Dunrud stands aboard a skiff, towing in a polar bear cub he lassoed.

While they never did find a musk ox, Dunrud did lasso two polar bear cubs at sea from a small boat, roped a walrus, and climbed sheer cliffs to obtain bird egg specimens. Importantly, Carl helped get the badly damaged Morrissey afloat after it ran aground and began taking on water. Carl, who spoke Norwegian, also acted as “translator” to the Danish speakers (since the actual translator missed the boat!). In all, Dunrud and the crew traveled up the west coast of Greenland and further, stopping at many towns and villages along the way. It was an adventure like no other for the Yellowstone outfitter. Dunrud later provided exciting details about all of these exploits in his autobiography, Let’s Go! 85 Years of Adventure.

Other notable voyages by Captain Bartlett and the Morrissey included scientific expeditions for the American Geographical Society, Museum of the American Indian, American Museum of Natural History, and others. There were many more voyages, including journeys to Greenland in 1945 to supply US military bases during World War II. Another significant trip was the 1928 Siberian Expedition to the Aleutian Islands, Bering Strait, and Arctic for the American Museum of Natural History, led by Charles Stoll and Cody, Wyoming’s, Harold McCracken. McCracken founded the McCracken Library in Cody, which is now part of the Buffalo Bill Center of the West. George Putnam also funded this trip. 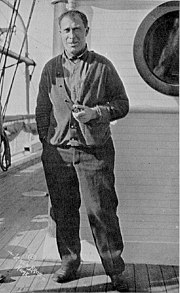 After Captain Robert Bartlett died in 1946, the Morrissey was sold to a South Pacific inter-island carrier of mail and passengers and then to Massachusetts’ Louisa Mendes. The Mendes family used the Morrissey in the trans-Atlantic trade to Cape Verde (it carried a cargo of food and clothing). Upon reaching the islands, Captain Henrique Mendes reregistered the schooner under the name Ernestina, after his daughter. The Ernestina made numerous transatlantic voyages, but fell into disrepair at Cape Verde. During the late 1960s interest rose in the US to save the historic schooner and, in 1977, the people of Cape Verde agreed to gift the Ernestina to the people of the United States. After her hull was rebuilt, she sailed back to the US in August 1982. Finally, in August 1988, the Ernestina returned to Brigus, Newfoundland, home of Bob Bartlett and, in 1990, was designated a National Historic Landmark. The schooner is now part of the New Bedford Whaling National Historical Park and is the Official State Vessel of Massachusetts.

Few other marine vessels are as important as the Ernestina-Morrissey.  The schooner is the oldest surviving Grand Banks fishing schooner; the only surviving 19th century Gloucester-built fishing schooner; one of two remaining examples of the Fredonia-style schooners, the most famous American fishing vessel type; the only offshore example of that type; and one of two sailing Arctic exploration vessels left afloat in the United States. These days, the Ernestina-Morrissey regularly sails the New England coast on educational cruises. Since 2016, however, the historic schooner has been undergoing a multi-year, multi-million dollar restoration in Booth Bay, Maine. Meeteetseans should be proud to know that Carl Dunrud was a part of this vessel’s rich history.