The 1860 election set the stage for a conflict that would last four years and cost more than 600,000 lives. Abraham Lincoln ran for presidential office against John Breckenridge, John Bell, and Stephen A Douglas. In the months leading up to the election, Emanuel Faust heard the Lincoln- Douglas Debate and decided, based on that debate, to vote for Abraham Lincoln. Enough American voters felt the same as Faust that Abraham Lincoln became the sixteenth President of the United States.

Only a year later, on April 12, 1861, the Civil War erupted at Fort Sumter, South Carolina. As the entire country plunged into conflict, East Coast farmland became battlefields. Men from throughout the east coast and the frontier flocked to the site of the conflict enlisting in either the Union or the Confederate armies. 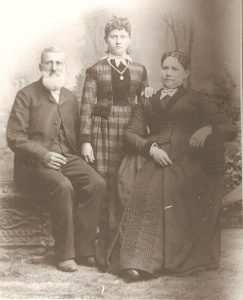 Emanuel Faust was one of these men, serving for three years with the Co B 46th Illinois Volunteers. Faust was present at the Battle of Gettysburg and might have heard the “shot heard ‘round the world”. Eventually, Faust and his family would make a home on the frontier in Meeteetse, Wyoming. He was joined by several other Civil War veterans who would shape the landscape of Meeteetse and its surrounding country.

Harry G. Session was also present at the Battle of Gettysburg. Session served with Company C of the Vermont 10th Infantry Regiment and was wounded during his service. He came to Meeteetse with his wife, Mary, after the war.

You might recognize the name Pickett from Pickett Creek up the Greybull River near Carter Mountain? The original Pickett was William Douglas Pickett who was born in Alabama in 1827. Pickett was a Confederate soldier who enlisted in 1861 in the Provisional Army of Tennessee. By 1865, he was on General William J Hardee’s staff. His Civil War service was not the first time that Pickett had been involved in the military. In 1846, Pickett served a short stint with the Texas Rangers during the Mexicanmerican War. After the Civil War, he came to Meeteetse by way of Montana and lived on his ranch, Four Bear, for over a quarter of a century. 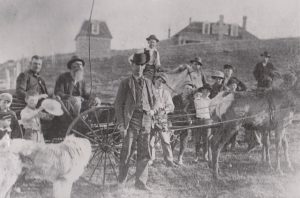 In these early days of Meeteetse, Pickett would have been neighbors with many Civil War soldiers including Laban Robert Hillberry. Hillberry was just a few years younger than Pickett and served in the Union Army, enlisting in 1863. Though his service record is largely a mystery, Hillberry was a well-known local figure with his elk-driven cart. In 1910, at the age of 82, Hillberry was renting a ranch up at Sunshine raising horses.

One local figure who might have rivaled Hillberry for most-colorful character was Peter Perrin. Peter reportedly served under the alias Thomas Fogarty. According to his paperwork from the soldier’s hospital in South Dakota, he enlisted in 1864 and was discharged in 1865. Peter proclaimed he had served on the USS Monauk, the ship which held the accomplices of John Wilkes Booth. Why Peter chose to serve under an alias remains a mystery.

Some of the veterans came to Meeteetse by way of the mining town of Kirwin. George Washington Pense served as a drummer with Company C of the Illinois Volunteers 34th Infantry Regiment and was with General William T. Sherman during Sherman’s march to the sea from November 15 until December 21, 1864. Sometime after the war, Pense took up mining and in 1900 was living in Kirwin. While Pense lived in Kirwin, he would have been neighbors with Confederate veteran, Daniel Leander Morse. Morse served with the Texas Infantry and lived with the Tewksburys up at Kirwin even after the avalanche that spelled the beginning of the end for the mining town. One has to wonder if they ever talked about their wartime experiences.

To learn more about the Civil War and the roles played by Meeteetse veterans, listen to episode 1 of “Meeteetse Stories” wherever you get your podcasts or at https://anchor.fm