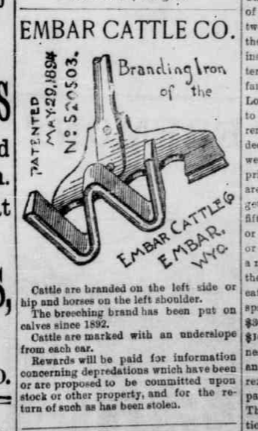 Embar Ranch brand in the Fremont Clipper on April 3, 1896

To understand Meeteetse’s early relationship with Fort Washakie, one must go back to 1868 when the Fort Bridger Treaty Council established the Wind River Reservation boundaries we are still familiar with today. One of the conditions of the Fort Bridger Treaty was that the United States Army would be present to protect the Shoshone from their enemies, such as the Lakota.

To fulfill this promise of protection, Camp Auger was established on June 28, 1869 where the town of Lander stands today. Visitors to Lander can visit Camp Auger’s original site at 427 Main Street. The camp received its troops and supplies from Fort Bridger which, at the time, had been a military post for eleven years.

Less than a year after Camp Auger was established it was reorganized into an independent post. With the reorganization came a new name and Camp Auger became Camp Brown after Captain Frederick H. Brown who had been killed in the Fetterman Massacre in 1866.

The commander of the camp during its transition from Camp Auger to Camp Brown was Captain Robert Augustus Torrey. Torrey would eventually resign from his military career and become a resident of the Big Horn Basin where he would own the Embar Ranch with his brother, Jay Torrey. During his time at the Embar Ranch, Captain Torrey was a regular visitor to Meeteetse for supplies.

In 1869, the former Civil War general Ulysses S. Grant became president of the United States. Grant entered office with the strong opinion that Native Americans should become Americans through the process of assimilation. This led to the development of his “Peace Policy”. The main goal of the “Peace Policy” was citizenship for Native Americans which it would accomplish through assimilation. Though the policy was ultimately unsuccessful, the Wind River Reservation received an Indian Agent out of it. The Indian Agent consulted with Chief Washakie to determine where the agency would best serve the Shoshone people. The result was to establish the Indian Agency 15 miles from Camp Brown. Camp Brown soon followed and in 1871 re-established itself fifteen miles from the original camp site to be near the Indian Agency. With the relocation, Camp Brown was renamed one last time and became known as Fort Washakie after the Shoshone leader, Chief Washakie.

A support community soon grew up around Fort Washakie. One of the most important businesses, at least for Meeteetse’s development, was a business run by J.K. Moore. Moore established his business in 1871, the same year Camp Brown re-established itself. His business included a general store, outfitting business, hotel, livery, and eventually the post office. Moore was the most prominent outfitter in Fort Washakie and his business made it possible for hunting excursions into the Big Horn Basin such as the one Otto Franc took in 1878. During Otto Franc’s early visits to the Big Horn Basin, he would have come out to Rawlins, Wyoming on train. From Rawlins, he would have either ridden the stage or rode on horseback to Fort Washakie. On stage, the journey from Rawlins to Fort Washakie was a six day trip but could be slower depending on weather. At Fort Washakie, he would have loaded up with more supplies, including a pack train of 10 mules, before venturing into the Big Horn Basin. 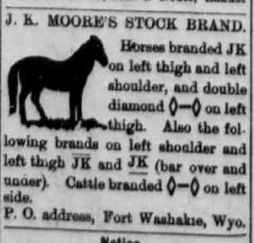 Advertisement for JK Moore’s business in the Washakie Clipper on March 12, 1897

William Kirwin and Harry Adams used an outfitter like J.K. Moore for their hunting trip in 1885. Kirwin and Adams came from Salt Lake City stopping in Fort Washakie for supplies before traveling over the Absarokas where they would discover the site of the future mining town, Kirwin.

It was also in Fort Washakie that Josh Deane received a dispatch to deliver to Major Reno after the Battle of the Little Big Horn. On his way to Major Reno’s camp, Josh Deane got his first look at the Big Horn Basin that would later become his home:

“On the summit of the mountains, I paused to look down for the first time into the Big Horn Basin, that great valley which was to be the scene of most of my activities and the home of my later years. From my point of vantage, I could see the Big Horn River and trace its course for many miles by the line of cottonwood timber along its banks. The Pryor Mountains were dimly visible and the Big Horn Range, with snow capped cloud peaks rising in the mist, was easily discerned.”

Josh Deane would eventually establish a private mail route from Fort Washakie through the Big Horn Basin to Montana. He ran the route from 1877 until 1884. This early mail route allowed for ranches to get necessities delivered to their doorsteps.

In his auto-biography, he recounts, “Col. Pickett offered to pay me 25¢ a piece for the letters I carried for him and 10 ¢ for papers. He asked if I was sure of getting through every week. I told him there was nothing sure about it. He evidently decided to take my services, even without that guarantee since it was better than nothing.”

The early mail route still had ties to Fort Washakie. Josh Deane wrote, “Returning to Fort Washakie from my scouting trip for the route, I gave J.K. Moore, post trader and post-master, my customer’s written orders for their mail, and began my career as a mail carrier.” 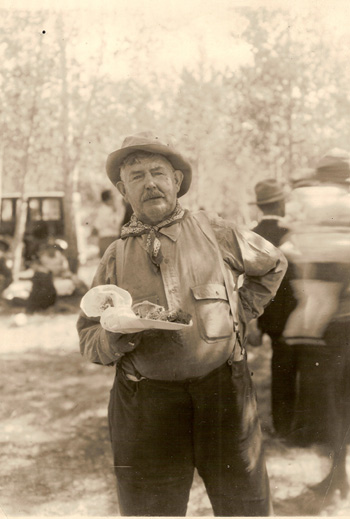 Through his mail route, Josh Deane saw the population of the Basin grow. A couple years after he began his route, the population in the Basin had grown so much the government determined it needed a regular route. In 1882, the railroad was extended to Red Lodge. With the new line another mail route was established from Red Lodge to Arland. The United States postal service used the route Josh Deane had laid out and divided it between two mail carriers. Deane began to work for the US government.

Fort Washakie’s importance to the town of Meeteetse decreased as infrastructure to Red Lodge and Billings made travel quicker and more efficient. However, the early Fort made settlement in the Basin possible.

For more information on J.K. Moore, visit the Pioneer Museum in Lander, Wyoming where they have an exhibit on Moore and his store.