Molesworth and Belden: A Collaboration in Design

Molesworth and Belden: A Collaboration in Design

Thomas Molesworth and Charles Belden are two men whose artistry captured the true essence of the American West. Molesworth, a furniture designer, and Belden, a western photographer, collaborated to create unique pieces of furniture, which served both a utilitarian and aesthetic function. Commissioned by Belden, Molesworth created items such as dressers and beds that incorporated silhouettes of the antelope that served as Belden’s signature throughout his career, as well as pitchforks and revolvers, which are symbolic to the Pitchfork Ranch where Belden lived. Additionally, Molesworth framed several of Belden’s photographs, thus showing the ultimate collaboration between the two. The lasting beauty of such pieces is a testament to the joint effort of these important western artists.

From left to right: A dresser commissioned from Molesworth, displayed with permission of the owner. Close up of the antelope graphic on the Molesworth dresser. Belden’s signature on one of his prints at the Meeteetse Museums which was incorporated into the Molesworth furniture for the Pitchfork Ranch.

So, who were these two innovative artists? Thomas C. Molesworth was an American furniture designer who is credited with popularizing the “cowboy furniture” style. Born in Kansas in 1890, Molesworth attended the Art Institute of Chicago from 1908 to 1909 where he was greatly influenced by the Arts and Crafts movement. In 1917, Molesworth married Laverne Johnston and subsequently enlisted in the United States Marine Corps. In 1931, Molesworth and his family moved to Cody, Wyoming, to start the Shoshone Furniture Company. His career gained great momentum in 1933 after publisher Moses Annenberg saw some of Molesworth’s pieces in the storefront window as he walked by. Annenberg liked what he saw and commissioned Molesworth to design the interior furnishings for his Ranch A retreat near Beulah, Wyoming. He purchased over 245 objects. This commission spurred the interest of others in Molesworth’s furniture designs. The popularity (and collectability) of Molesworth’s creations began to spike and the designer eventually furnished such places as the TE Ranch near Cody (owned by Coca Cola magnate Bob Woodruff), the Plains Hotel in Cheyenne, Wyoming, the Pendleton Hotel in Oregon, the Rockefeller Ranch in Jackson, Wyoming, and Dwight Eisenhower’s home in Gettysburg, Pennsylvania. Molesworth operated the Shoshone Furniture Company until 1961. Although he died in 1977, Molesworth’s creations continue to capture the rustic nature of the American West.

Charles J. Belden was an American photographer known for his iconic photographs of the Pitchfork Ranch, near Meeteetse. Born in 1887 at San Francisco, Belden was influenced at a young age by his uncle who was a photographer. Belden was a graduate of the Massachusetts Institute of Technology (MIT). It was at MIT where he became friends with Eugene Phelps, whose family owned the Pitchfork Ranch. Following his graduation in 1910, Belden moved to Wyoming and married Frances Phelps, Eugene’s sister. In 1922, Belden became the co-manager of the Pitchfork Ranch. He was no cowboy, but did manage the ranch’s finances, while Eugene managed the stock raising and other ranch activities. Moving to Wyoming did not hamper Belden’s passion for photography; in fact, he bloomed there, taking thousands of images of the Pitchfork Ranch between 1910 and 1940. These mostly candid (but sometimes staged) photographs would ultimately make the Pitchfork famous, as they made the covers of National Geographic and Life magazines, two of the most important periodicals of the time. They also appeared in major newspapers, such as the Denver Post. His images were highly regarded for their composition and use of light. They were even more important for their documenting of western ranch techniques and daily ranch life. 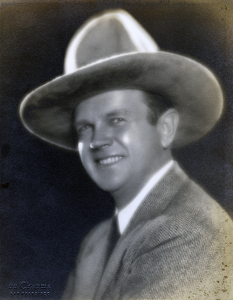 Unfortunately, the Belden’s divorced in 1940 and Charles moved to the Tampa-St. Petersburg area of Florida. Belden remarried and continued his photography there; this time, however, his subjects were “beach babes” and life along the Florida Gulf Coast, instead of cowboys and cattle. In fact, after the move, he changed his nickname from “Antelope Charlie” to “Seahorse Charlie.” His Florida photographs were never as popular as those taken in Wyoming, perhaps because most people by then had access to cheap cameras. The novelty of the photograph was gone. On February 1, 1966, Belden, who was suffering with Parkinson’s Disease, died of a self-inflicted gunshot wound.

Nowadays, the works of both men are collectable, but on different levels.  In 2013, Christie’s in New York auctioned many of the Molesworth furnishings from Ranch A for millions of dollars. Belden’s Pitchfork prints can periodically be found at very modest prices. Yet value cannot always be measured in dollars. The Meeteetse Museums, located at 1947 State Street, showcase many of Belden ‘s prints, as well as the Phelps/Belden memorabilia. The museums also hold over a dozen Molesworth pieces, including some on which Molesworth and Belden collaborated.  From office desks and dressers to chairs and curtain rods, the Meeteetse Museums offer a good introduction to the Molesworth style over time. Thousands of Belden’s images, digitized from glass plate negatives, can be viewed on the website of the American Heritage Center of the University of Wyoming.