December 5, 2020 by Fig in Uncategorized

During research for the first season of Meeteetse Stories, the Meeteetse Museums’ podcast, we discovered something odd: more than one veteran from Meeteetse had a prison record.

The first veteran with a rap sheet was Grover Cleveland Gabbard. Born at the end of the first presidential term of President Grover Cleveland, our veteran was born in Kentucky on December 10, 1899, and named after the current president. This was perhaps an ironic namesake given the future of young Grover.

In 1910, Grover was living with his older brother Riley and younger sister Eva in Buffalo, Kentucky. The children lived with their grandparents Elisha and Mary Gabbard, likely helping out on Elisha’s farm.

While missing from the 1920 Census, Grover was living in Cow Creek, Kentucky with his extended family at the 1930 Census. At the time he is recorded as being married and a laborer on the family’s farm. The 1930 Census also lists his service during the Great War. 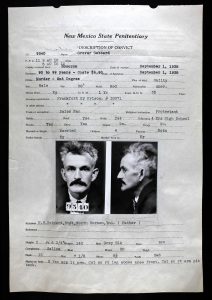 Eight years later, Grover was imprisoned in New Mexico for second degree murder. According to the 1940 Census, Grover was living in Santa Fe in 1935. However, his prison intake records tell a different story. On September 1, 1938, he was admitted to the State Penitentiary for second degree murder, taking on the identity of prisoner number 9540. According to the prison records, Grover had been in New Mexico for one year working as a salesman. He was married with four children at the time and records show one previous conviction in the Frankfort Kentucky prison. His sentence was 90 to 99 years or a cost of $6.90. We know he served at least two years on this sentence since the 1940 Census lists him as an inmate. However, we also know that he lived in Meeteetse in the late ‘60s. Did he buy his freedom or was he released for another reason?

Grover is not the only veteran with a conviction record, though the second is perhaps more surprising.

Levauna Iris was born on July 29, 1920, in Meeteetse to Leonard and Irma Baldwin. She enlisted in the Women’s Army Corps on March 10, 1944. At the time she was living in Multnomah, Oregon. Her occupation on the Army Enlistment Records reads “Semiskilled welders and flame cutters”. We don’t know much about her service with the Women’s Army Corps unfortunately, but someone with her welding skills would have been very useful to the Army.

Just two years later, she was admitted into the Women’s Reformatory in Rockwell City, Iowa. Records show she was admitted on September 26, 1946, along with her “partner-in-crime” Bettie James Luckow. Their reason for admission is listed as “assault with intent to rob” and lists judge Paul A. McCold. Both girls were from Wyoming. While Levauna is listed as “temperate,” Bettie is listed as “intemperate,” meaning Leauvana did not drink alcohol while Bettie did.

Again, we are left with more questions than answers about Levauna and her associate, Bettie. We do know that Levauna was married, for the second time, two years later on December 31, 1948, in Portland, Oregon, to Rupert Smith, a welder. She appears not to have had more run-ins with the law and died in January of 1995.

Do you know anything about Grover Gabbard or Levauna Baldwin? Let us know by emailing programs@meeteetsemuseums.org.

Currently closed to the public for exhibit development.