The Boys of Company K

The Boys of Company K

The soldiers of Company K from Meeteetse before leaving for training camp.

The company was led by Captain Bertram Bennett. Bennett had grown up in Meeteetse as the son of the doctor, William S. Bennett, and his grandfather, Joseph D. Bennett, was a veteran of the Civil War. As Captain, Bennett wrote often to E.P. Bowman, mayor of Meeteetse at the time, updating the town on the Company’s activities.

The Company left Wyoming for training at Camp Greene, North Carolina. Unfortunately, Camp Greene is also where they lost their first member, Marion Tanner, to pneumonia. 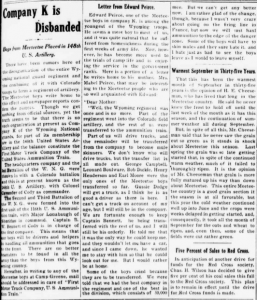 Announcement of the Company K disbandment in the Meeteetse News on September 29, 1917.

While at training camp, the Army announced Company K will be disbanded. The disbandment was an effort on the United States’ part to limit causalities from specific hometowns. In other words, if Company K had been deployed to the front lines in France, there was a chance the entire company could be wiped out. In that event, Meeteetse would have lost the majority of its young men.

The disbandment didn’t take place until January when the Company has already reached France. At the time of their arrival, World War I was a war on one front. Germany had defeated Russia and focused all its efforts on the Western Front in France. France was a war zone and local villages full of civilians were caught between the Allies and Germany.

When they arrived in France, George Campbell, Leonard Boulware, Bob Dickie, Henry Henderson, and Earl Moore left the majority of Company K for the 167 Infantry of the 42nd Division, known as “the Rainbow Division”.

The transferred men soon found themselves in major military engagements: the battle of Chateau Thierry followed by Meuse-Argonne Offensive. On October 23, 1918 a letter appeared in the Cody Enterprise from Leonard Boulware. He wrote:

“Dear Dad: I guess you will be surprised to hear from me and I hope this will find you well. Thank God, I am still alive, but I am in the hospital just not but not dangerous [sic]. I have gone through two of the largest battles that have been fought.”

Leonard lost comrades during both battles. There were 1,908 causalities during the Chateau Thierry followed by over 120,000 causalities in the Meuse-Argonne Offensive. Robert Bottles and Earl Moore were among those numbers. Both were thought to have died during battle. Robert, the youngest member of Company K, died at eighteen years old. He had spent five months and nineteen days in France before his death on July 27, 1918. Bottles would eventually be buried at the Arlington National Cemetery. Earl Moore, mistakenly reported as dead, had been separated from his company and returned to Meeteetse when the war was over.

Many of the Company K soldiers remained with the 116th Ammunition Train for the duration of their service. Throughout the conflict, they were delivering ammunition to the frontlines. They returned to the United States throughout the first six months of 1919. Though stateside, many men suffered from ill health and passed away in the months and years following armistice. Their deaths were directly related to the wounds received on the Western front, both physical and mental. Some registered for the draft in World War II, ready to serve their country yet again.

The men of Company K: