The Mystery of the Iron Creek Brickworks

The Mystery of the Iron Creek Brickworks
By Amy Phillips
The First National Bank and Weller Hotel are both built from local brick. The question is, how local is that brick?
The First National Bank was built in 1901. Unfortunately, the newspapers from Meeteetse at that time period are not digitized or are completely missing. There is, however, a note in the Meeteetse Museums Archives by Georgia Schultheiss which reads: “The First National Bank building located on the corner of Park Avenue and Warren was constructed in 1901 of local sun-dried bricks.” 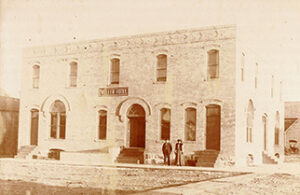 Photograph of the Weller Hotel circa 1904. 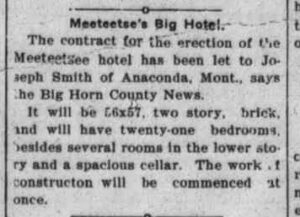 The Cheyenne Daily Leader published that Joseph Smith was awarded the contract for building the Weller Hotel on April 10, 1902.

Thankfully, there is more information available on the building of the Weller Hotel. The Cheyenne Daily Leader published an article on April 10, 1902 stating that the contract for building the hotel had been given to Joseph Smith of Anaconda, Montana. In September of the same year, The Wyoming Dispatch wrote, “The Weller house at Meeteetse, which has just been finished and thrown open to the public, is decidedly the finest hotel in the Big Horn basin. It is a two story brick, with 27 rooms all warmed by steam and lighted by gas.” The hotel was torn down in 1973. An article in The Cody Enterprise reporting the demolition authored by Billye Renner mentioned the bricks, “Mr. and Mrs. Daniel Weller, whose grandson, Henry Weller, is a member of the present-day wrecking crew, finished the building in 1902. It was made of locally-made bricks. // These bricks, also used in some of the town’s other early buildings, were made at Iron Creek. Several old-timers in the area remember the Iron Creek foundry operation.”
As previously mentioned, many newspapers from the late 1890s and early 1900s are missing or not digitized which means accounts from the day are rare. But even outside of those dates, there are no mentions of a brick works, brick factory, or foundry on Iron Creek in the newspapers. As we learn in our second episode of the third season of “Meeteetse Stories,” brick making is a highly technical trade. Firing the bricks is especially tricky.
A photograph in the Museums’ collection labeled “Brick Plant on Iron Creek” seemed to offer more information. The Powell Tribune published the photograph along with a brief description of the Museums’ quandary on March 10, 2022.. Soon, the Museums received numerous calls all of which confirmed that the photograph was not of the brickworks at Iron Creek. Instead, it is the Big Horn Brick Company run by Newt McGuffey and located outside of Cody on the Powell Highway. 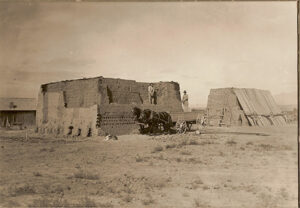 Photograph labeled “Brick Plant on Iron Creek” in the Meeteetse Museums collections. The photograph is actually of a brickworks which was located on what is now the Powell Highway and owned by Newt McGuffey.

Despite the dead-end, the Museums still have a possible brick maker. Before the McGuffey’s owned the brickworks, it was operated by a Mr. Delino. Delino moved to the Bighorn Basin from Anaconda, Montana where he would eventually return. You might remember from earlier that Joseph Smith, the man who built the Weller Hotel is also from Anaconda, Montana. Coincidence? Who knows. 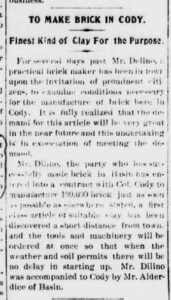 Mr. Delino’s contract with Col. Cody was published in The Cody Enterprise on January 31, 1901.

We find numerous newspaper clippings that confirm that Mr. Delino was hired by Colonel Cody (Buffalo Bill) to fire bricks. One of these, published in The Cody Enterprise on January 31, 1901, says, “For several days past, Mr. Delino, a practical brick maker, has been in town upon the invitation of the prominent citizens, to examine conditions necessary for the manufacture of brick here in Cody. It is full realized that the demand for this article will be very great in the near future and this undertaking is in expectation of meeting the demand. // Mr. Delino, the party who has successfully made brick in Basin has entered into a contract with Col. Cody to manufacture 190,000 brick just as soon as possible as elsewhere stated, a first class article of suitable clay has been discovered a short distance from town and the tools and machinery will be ordered at once so that when the weather and soil permits there will be no delay in starting up. Mr. Delino was accompanied to Cody by Mr. Alderdice of Basin.” By April, the same newspaper reported, “The party who is to manufacture brick for the town, Mr. Jack Delino, arrived from Otto yesterday and will commence operations at once. He has now a contract for 300,000 for the new opera house and bank for Col. W.F. Cody which he will execute at the first possible moment.”

This notice published in The Cody Enterprise on April 4, 1901 suggests that Mr. Delino’s contract increased or he entered into a second contract with Col. Cody.

At this time, Delino is living in Otto and, as The Cody Enterprise article stated, had already made bricks for Basin. It is possible that Delino had been contracted to make bricks for the Weller Hotel and First National Bank prior to his contract with Colonel Cody. 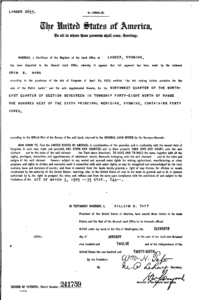 This patent was issued to Orin B. Mann for the possible location of the Iron Creek brickworks in 1912, several years after we believe the brickworks was in use.

One possible location of the Iron Creek brickyard, on the southern site of the Pitchfork Highway approximately three miles outside of Meeteetse, was land in the public domain until O.B. Mann was issued the patent for that area in 1912.

For other, later buildings in Meeteetse, there are other possibilities for the brick maker. The Big Horn County News reported in March of 1906, that “J.D. Bennett announces that he has made arrangements to burn a kiln of brick here this summer. A probable new business block will swell the kiln to 100,000.”  You may remember J.D. Bennett as a Civil War veteran and trained veterinarian as well as former proprietor of the blacksmith shop.

F. Hubbard was involved with firing bricks but the location where this took place is absent from the newspaper article published in The Big Horn County News on April 4,1906.

A month later the same newspaper wrote that “F. Hubbard of Meeteetse will put in his time burning a kiln of brick.” We don’t know who F. Hubbard was, as Frank Hubbard, the only F. Hubbard, we know of living in Meeteetse was only two at the time the bricks would have been fired in 1906. It is likely that J.D. Bennett arranged for F. Hubbard to fire the bricks as Bennett likely did not have the skill to fire a kiln of bricks.
So the mystery of the Iron Creek brickworks continues. For more information on brick making, check out our recent episode on “Meeteetse Stories” which can be found wherever you listen to podcasts. If you happen to know anything about the Iron Creek brickworks, we would love to add your information to our records.