April 6, 2022 by Fig in Archaeology‚ The Bison Project

In June 2021, we sampled 23 bison from the Project to conduct radiocarbon dating and stable carbon and nitrogen analysis (Figure 1). For analysis, the samples were sent to John Southon at the University of California, Irvine W.M. Keck Carbon Cycle Accelerator Mass Spectrometer Lab. 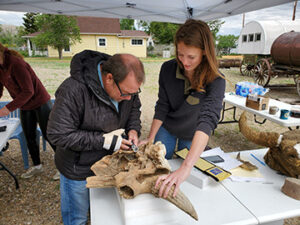 Figure 1. Dr. Kenneth Cannon and Amy Phillips sample a bison for radiocarbon dating and stable isotope analysis. This bison had to be drilled because the petrous portions were inaccessible.

When calibrating the radiocarbon dates to appear in calendar years (AD or BC), we can also set limits based on the area’s history. For example, we know of historical accounts claiming to kill the last wild bison in the Bighorn Basin, so we can set that later (upper) limit to the 1880s rather than the 1910s. This subtly changes the statistically most likely date for each bison to have lived. 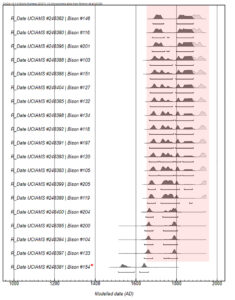 Figure 2. All radiocarbon dates in red are bison which likely lived in the 1700s.

Now, if you remember, based on the morphology (shape) of the bison crania measured, we said the bison are all morphologically modern, which means they date to within the last 3,000 years. The majority of bison radiocarbon dated (73.9%) likely lived in the 1700s (Figure 2) and the other 26.1% bison are even older (Figure 3). Hence, the morphological age estimate was confirmed; all the bison are modern Bison bison bison. 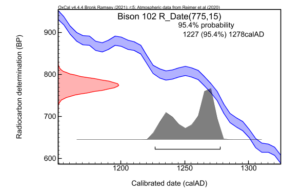 Figure 4. Radiocarbon dating results for Bison #102 show that the bison most likely lived during the middle of the 13th century.

The oldest bison radiocarbon dated was Bison #102, which came back at 775 BP +/- 15. When that radiocarbon date is calibrated into a calendar year, we get a most likely year of death around the middle of the 13th century AD (Figure 4).

Bison #102 would have lived about the same time the climate shifted from the Medieval Warm Period to the Little Ice Age. Bison #102’s stable carbon and nitrogen isotope analysis will provide clues as to how that transition may have affected him. If that climatic information doesn’t help you put Bison #102 in your mental timeline, here are some other “current events” of the time. The 1200s are perhaps best known for the Crusades. The Crusades were a series of excursions by Christian Europeans to gain control of the Holy Lands. The Crusades lasted from roughly AD 1095 to 1291. Near the end of the century, in AD 1271, Marco Polo set sail for China. 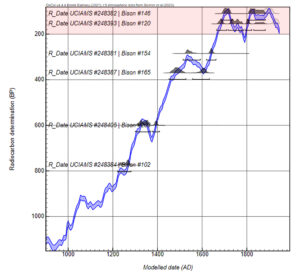 Figure 5. The blue line on this image is the modern radiocarbon dating curve, notice how it becomes increasingly unpredictable around 200 radiocarbon years BP.

This routine lower dating limit occurs after 26.1% of the bison in our dataset are likely to have lived, but at the same time as the other 73.9% of the bison. For most radiocarbon dating purposes, if a date comes back within 200 radiocarbon years, it is termed modern, and the researchers move on. However, we’re particularly interested in what’s happening in North America to bison populations during this time. So, we get to deal with the eccentricity that is the 14C curve in the last 200 radiocarbon years.

Site 48PA3277 is an example of an archaeological site along the Upper Greybull River that runs into this same problem. Fifteen bison bone fragments radiocarbon dated from the site indicates that the site’s most likely time of occupation was between AD 1670 and 1790 or 1800 and 1930, which doesn’t really narrow down the time of site use in any very useful way. These bison date within that pesky routine lower dating limit. However, for 48PA3277 there was something else present at the site that could help date the site’s occupation without relying on radiocarbon dating: glass trade beads.

It’s a familiar story to many of us. Europeans arrived in North America with trade goods that had never been seen by the Indigenous people here. Glass trade beads, projectile points, new kinds of fabric, and more were exchanged with Native Americans for things like bison hides. While this market economy caused numerous problems, it had one benefit for reconstructing the past: manufactured trade items tend to have relatively tight chronologies.

Figure 6. These red-on-white glass beads are an important temporal marker not found in site 48PA3277. Their absence from the site means that the site dates to before the 1840s. Photograph courtesy of GRSLE Archaeology.

Glass beads, like those from 48PA3277, were an essential trade item. Beads were already extensively used as decoration by the Indigenous peoples of North America. Different styles of glass beads arrived in North America at different times, styles changed through time, and most importantly the chemical composition of the beads also changes. Glass beads can then be dated using all three of these traits within 30 years or less (von Wedell). So, the beads at site 48PA3277 can narrow down the radiocarbon dates for a time of occupation. Once the dates are refined, could potentially point to other clues and help age-associated bison bones found less secure contexts. This is why it’s so important to leave things in their original context—sometimes, the smallest clues (some of these beads are not much large than the head of a pin) can make a big difference in our interpretation of a site or object.

Bison from the Project, unfortunately, lack the context (detailed information on where they were found and what other pieces of evidence were associated with them) to be able to use similar methodologies to refine the radiocarbon dates. Nevertheless, with other sites in the area, like 48PA3277, also dating within this problematic 200 radiocarbon years range, there is potential to compare stable carbon and nitrogen isotopes and potentially even DNA derived from the Project sample to develop new methods to learn more about the relationship between them.

Furthermore, radiocarbon dating does show us that the bison within that routine lower dating limit all lived within a relatively short time frame (approximately 100 years). That time frame is fascinating when we think about what was happening here at that time. Native American groups on the Plains had access to horses and could pursue bison on horseback. Euro-Americans had not yet begun to “explore” the West yet– Lewis and Clark did not make their famous expedition Westward until 1804, and intensive “exploration” followed.

When all the radiocarbon dates are considered, they reveal a series of questions rather than answers. First, between the AD mid-1200s to the early 1800s the Medieval Warming Period ends, and the Little Ice Age begins. Second, our data set has bison from before and after horses’ reintroduction to North America. Third, all the radiocarbon-dated bison predate the population bottleneck event of the 19th century. Moreover, these bison also predate intensive, sedentary settlement of the Bighorn Basin by at least 75 years. How did bison in the Bighorn Basin respond to these changes?

In our pursuit to answer the original question of “When did these 23 bison live?”, we have begun to refine our original, broad question into a series of more precise questions. This isn’t always possible in science— sometimes there just is not enough data to refine a question. It’s a good sign for the Bison Project that there is enough data to be able to ask more questions and follow where the data leads.