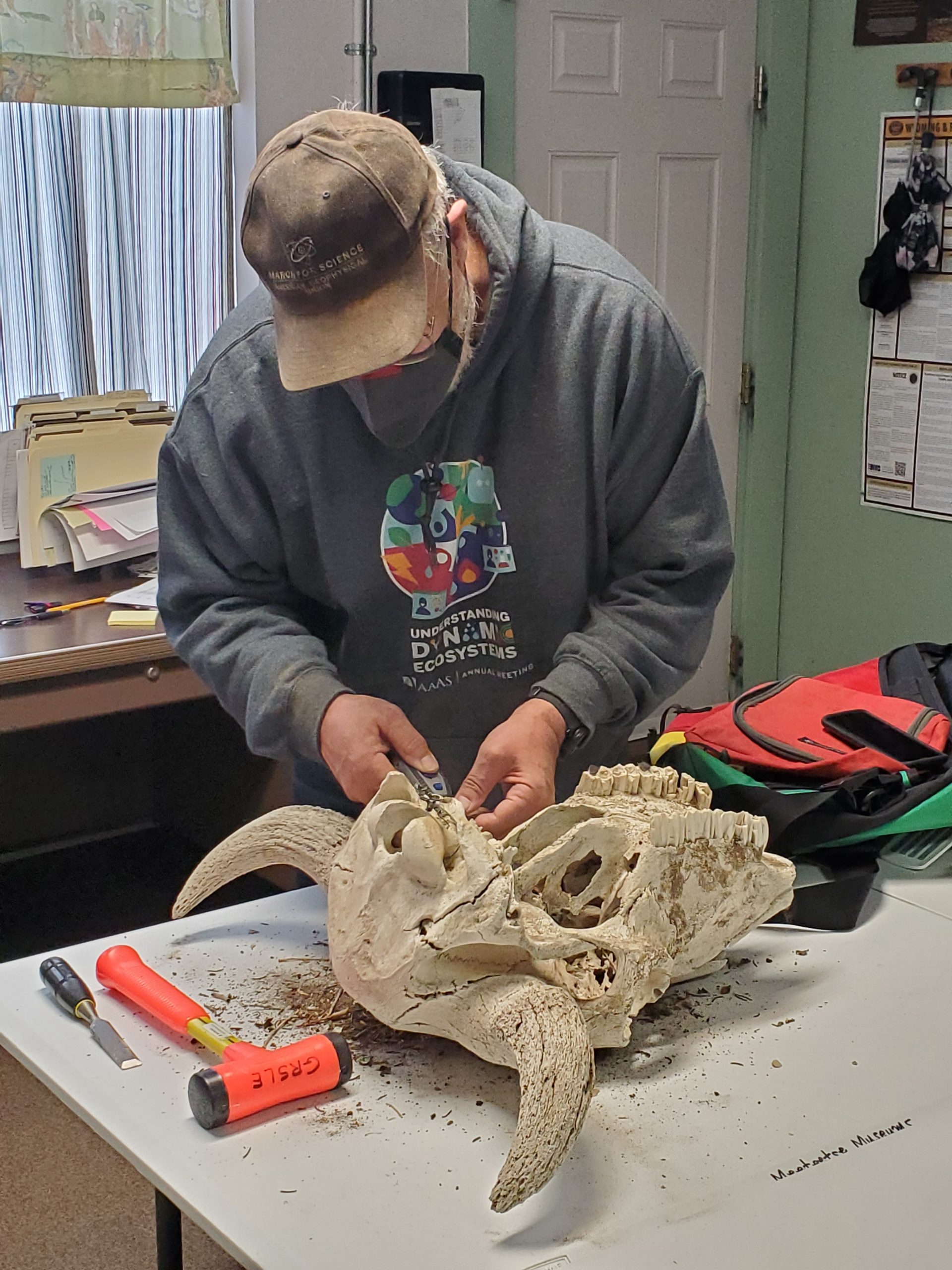 Since our last update (https://meeteetsemuseums.org/bison-of-the-bighorn-basin-project-an-update/), the Bison Project received a grant from the Fund for Wyoming Archaeology of the George C. Frison Institute of Archaeology and Anthropology. The funds will go toward radiocarbon dating and conducting stable carbon and nitrogen analysis on roughly nine of the bison that were measured for the project. 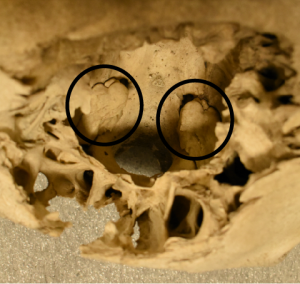 Circled are the petrous portions in a bison cranium that has had the brain casing opened. These are the bone of choice to remove for radiocarbon dating and stable isotope analysis since the bone is dense and its removal does not affect the visual appearance of the bison cranium.

Additionally, Amy Phillips, Director of Education and Programs, was selected for the Buffalo Bill Center of the West Resident Fellowship. The Fellowship will allow Amy to measure 11 bison crania from the Draper and Buffalo Bill Museums, work closely with the Center’s education staff to develop programming for schools throughout the Basin, and provide context to the project through first person narratives and historical artifacts. The fellowship comes with a stipend that will allow further analysis. In total, the Museums has the funds to radiocarbon date and conduct stable carbon and nitrogen analysis on fifteen bison crania. Additionally, some participants who brought in bison crania will be donating the $330 fee for their bison to also be tested. 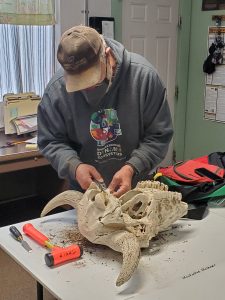 Dr. Larry Todd uses a dremel on a bison cranium. This is the method that will be used if the cranium is missing the petrous portion.

Radiocarbon dates give us an idea of when the bison lived. In radiocarbon dating, the decay of carbon-14 is measured. Carbon-14 is incorporated into living organisms through plants that were consumed by the bison. During an organism’s lifetime, levels of carbon-14 in the body remain relatively constant. When an organism dies, the carbon-14 begins to decay at a predictable rate allowing us to estimate when that organism died. This date is presented as Radiocarbon Years Before Present but can be calibrated to years before present or as calendar years (AD or BC). The half-life of carbon-14 is 5,730 years and radiocarbon dating can be used to date organic remains to roughly 50,000 years. 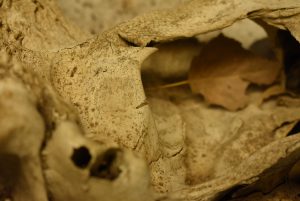 A dremel mark on the underside of a bison cranium. This is only one dremel mark without the sample removed. A sample must be approximately a gram.

Since we were able to compare the morphology of the bison measured in the study with bison from Dr. Chris Widga’s national data set, we know the bison in the project are morphologically modern. This means we are likely looking at bison from the past 3,000 years. Radiocarbon dating will be an excellent tool for providing an age for when the individual bison died. 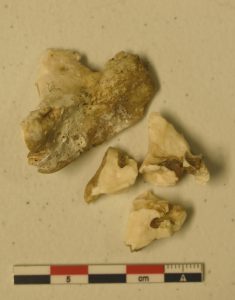 Final sample of a petrous portion that will be radiocarbon dated thanks to a donor.

Stable carbon and nitrogen isotope analysis will provide information on diet, movement, and environment.  Isotope analysis takes advantage of the oft-heard phrase “you are what you eat” to reconstruct the last few years of a particular bison’s life.  Depending on what plants and drinking water are available and consumed the animals will ingest different percentages of the isotopes of elements like carbon and nitrogen.  As the food is digested and then consumed, the different isotopic ratios are incorporated into blood, flesh, hair, and eventually teeth, bones, and horns.  By looking at the difference in isotopic values in the remains of a long-dead bison we can begin to reconstruct some key aspects of their diet and environment.  Bone, being an active organ, is remodeled every few years, but teeth are not.  This makes teeth a particularly useful tool because it is not remodeled and can provide a longer history of the animal.  Teeth can also be sampled to provide a more detailed record of a bison’s life.  This allows us to examine differences that may represent seasonal differences in diet, and potentially where an animal was living and grazing during the first several years of its life.

The radiocarbon dating allows us to look at bison morphology over time in the Bighorn Basin. The stable carbon and nitrogen isotope analysis will allow for a more fine-grained look at individual life histories of the bison measured during the study. This in turn has implications for wildlife management today as more bison are reintroduced to their former lands. This database may also help us understand how the Bighorn Basin may have changed during previous climate regimes, such as the Little Ice Age when cooler and moister conditions were likely present.