William McNally earns the distinction of owning the Meeteetse townsite before it was a town. McNally was born in New Jersey in 1853 to Irish immigrants. At age 22, in May of 1875 McNally enlisted with the U.S. Army 5th Calvary Company L in Boston, Massachusetts. The record of enlistment lists McNally’s occupation as “blacksmith.”  He served for five years before his honorable discharge at Fort Washakie. Soon after his discharge, the 1880 Census places McNally in Rawlins, Wyoming working as a laborer. 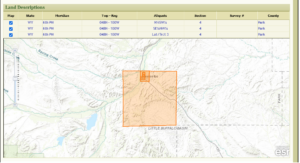 On October 10, 1894, William McNally is issued the patent on 158.05 acres which includes the downtown of present-day Meeteetse (Figure 1).  According to the Homesteader Act of 1862, to be issued a claim, you had to improve the land for five years before earning the property’s claim. This means McNally would have filed his initial claim around 1889. However, there are accounts in the Museum Archives that place him in the Meeteetse-area prior to 1886. 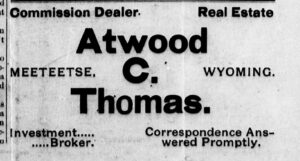 Regardless of when McNally finds his way into the Bighorn Basin, on his claim, he opens a blacksmith shop and builds a cabin to live in across the street. On February 12, 1896, McNally sold his property to A.C. Thomas. A.C. Thomas advertised in the Meeteetse News frequently throughout the late 1890s and early 1900s. He was a real estate agent and insurance broker (Figure 2).

Figure 3. This mention published in The Peoples Voice on July 31, 1891 (five years after McNally sold his land to A.C. Thomas) suggests that the sale of McNally’s land was not as smooth as it might have appeared.

However, there may be more than meets the eye in the sale of McNally’s land. The Peoples Voice reports on July 31, 1891 that, “Hon. C.H. Burritt, of Buffalo, has been retained as co-counsel with County Attorney Rathbone, by A.C. Thomas in the case of McNally vs. Thomas” (Figure 3).

On the 1900 Census, McNally is placed at Four Bear, Wyoming where he owns his own home and is employed in farming. From this point on, McNally is never mentioned as the blacksmith or associated with blacksmithing again. Why he left blacksmithing is unknown, but his legacy in the Meeteetse Blacksmith shop would have a long history in town. 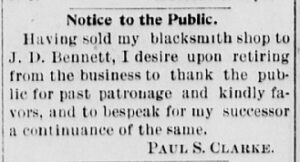 Figure 4. Paul S. Clarke’s message to patrons notifying them of the sale of the Meeteetse Blacksmith shop published in The Big Horn County News on May 6, 1905.

On the 1900 Census, Henry Brown is listed as “blacksmith.” In 1905, a notice was published in the Big Horn County News that Paul S. Clarke sold his blacksmith shop to J.D. Bennett, and retired from the business (Figure 4). Bennett, a veterinarian and hobby woodworker, employed T.J. Nichols as the blacksmith (Figure 5). That same year, Charles Raines replaced Nichols as blacksmith. 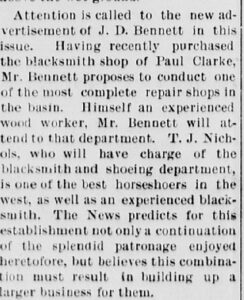 Figure 5. The Big Horn County News published on May 20, 1905 notifies the public of the changes in ownership for the blacksmith shop.

In January 1906, John W. Mitchie, spelling based on Census records, purchases the blacksmith shop (Figure 6) and keeps Charles Raines on as blacksmith. The last advertisement we find is Mitchie’s July 1908 advertisement in the Big Horn County News. Unfortunately, the Big Horn County News is only available digitized online from March 5, 1898 – July 18, 1908 while The Meeteetse News is only digitized from August 17, 1912 – June 23, 1932.  The 1910 Census provides some information during this period. On the census, John Mitchie, Charles Morton, and James Wyllis are all listed as blacksmiths in Meeteetse.

Photograph of John Mitchie, blacksmith in Meeteetse, in the Meeteetse Museums collection. 2015.0001.0011.

Figure 7. Thomas Wyllie’s advertisement published in The Meeteetse News on August 17, 1912 is the first advertisement after the break in digitized papers. 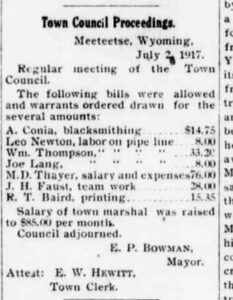 Figure 8. Meeteetse’s Town Council Proceedings published in The Meeteetse News on July 13, 1917 are the first association of Andre Conia with the blacksmithing business.

In the first available issue of the 1912 paper, only Thomas Wyllie is advertised as the blacksmith (Figure 7). In 1917, Andre Conia took over ownership of the blacksmith shop. The town council proceedings of July 1917 list Conia on the same line as blacksmithing (Figure 8) and a December advertisement from the same year published by Conia notifies the public that the Meeteetse Blacksmith Shop will accept only cash. On January 18, 1918 The Meeteetse News published that Thomas Wylie will move to Cody to continue his work in blacksmithing while a Mr. Swain will move to Meeteetse as the new blacksmith. 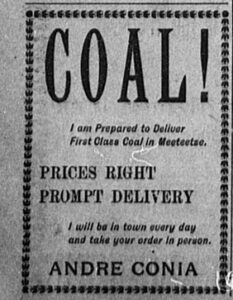 Figure 9. Andre Conia publishes an advertisement for his coal hauling business in The Big Horn County News on December 16, 1905.

Andre Conia’s ownership of the blacksmith shop is interesting because Conia was associated with coal delivery on-and-off in Meeteetse beginning in 1902 (Figure 9 and 10). With his involvement in the coal business, Conia could have supplied the coal for the forges without paying someone else to do so. Conia was originally from France. He immigrated to the United States in 1895 after the death of his wife. According to Conia’s great-grandson, Jerome Conia, the family believes the USA in search of new business opportunities and a new life. It is unclear why Andre chose Meeteetse. What it because he saw in Wyoming the next frontier? Perhaps he had preexisting contacts there, or because he found his inspiration during the Wild West Show’s 1889 European tour? In 1906, Andre received the visit in Meeteetse of his twin 17 years old sons sailing from France: Andre Edouard Conia and Edouard Andre Conia. The family believes Edouard Andre was in a shooting match against Buffalo Bill Cody and won. This would have occurred during a fair either in Meeteetse or in Cody.

Figure 10. Portrait of André Conia, likely a passport photo from his return to France, courtesy of Jérôme Conia. 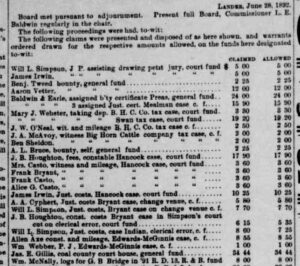 Through this tangled web of ownership and other blacksmith shops in town coming and going, the Meeteetse blacksmith shop was a central component of town. Before there was even a community, the shop sat next to the Greybull River on the “road” to Arland, Cody, and beyond. McNally, it appears, even put in a bridge in 1892 (Figure 12). 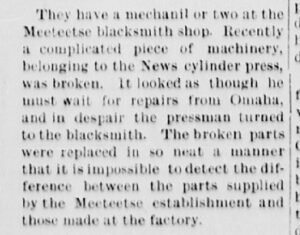 Figure 12. This endorsement of the blacksmith shop appears in The Big Horn County News on June 17, 1905, likely during J.D. Bennett’s ownership of the shop.

At such a valuable location, the shop was an absolute necessity during its time. Today, when cars are the main source of transportation, mechanic shops are important for communities in a similar way that blacksmith shops were important to them. For many years, Meeteetse needed the blacksmith shop to shoe horses, fix broken wagon wheels, mend farm and ranch equipment, and take on special jobs when necessary, like fixing the newspaper’s specialty equipment (Figure 11). To learn more about blacksmithing and its early importance to Meeteetse, listen to season 3 of the Museums’ podcast, “Meeteetse Stories” which can be found wherever you listen to podcasts including Spotify, Stitcher, Apple and Google Podcasts, and iHeart Radio. To listen from your desktop, click here.

For more information on blacksmithing, listen to the third season of our podcast “Meeteetse Stories” episode 1 found wherever you listen to podcasts.

Alex Pole, special guest on our podcast “Meeteetse Stories,” authored Blacksmith: Apprentice to Master which can be ordered here.