Mary Josephine Corbett led a fascinating life, and not only because of her numerous divorces. She was born in Brome, Quebec, Canada in 1854 as Mary Josephine Wing. Mary came to the United States in 1871, a date listed on the census records. Mary may have returned to Canada to marry William Fletcher Jr. Together the couple had two sons, only one of which lived to adulthood. The couple moved to West Newport, Vermont together where they are recorded on the 1880 Census. In 1881, Mary remarried her neighbor’s son, Smith Henry Niles.

Smith and Mary move to Minnesota where their son Ralph is born before moving to Iowa where they are recorded on the 1885 Iowa State Census as living in Riceville, Iowa. That same year, Mary gives birth to her fourth son, Earl Niles. In 1886 she gave birth to Raymond Niles who died as an infant. In 1891, Mary gave birth to her last son, Roy Samuel Niles. 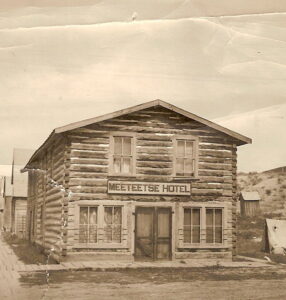 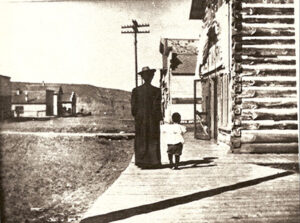 Figure 2. Mrs. W.O. Steele walks in front of the Meeteetse Hotel toward the Greybull River.

How Mary came to Montana is a mystery but in 1895, she married John Franklin Corbett, local businessman and rancher. Their marriage lasted during her ownership of the Meeteetse Hotel, a building moved from Arland to Meeteetse which opened for business in 1897. On the 1900 Census, Mary is listed as a dressmaker and lives in town with her husband, John, and sons Earl and Roy. The following year, Mary entered her fourth marriage to Edward Blake. She was married to Blake until her death in April 1908.

Figure 3. The Fremont Clipper published a mention of the new hotel in Meeteetse on April 3, 1896.

During her time in Meeteetse, Mary is probably best known for her proprietorship of the Meeteetse Hotel (Figures 1 and 2). The Fremont Clipper published a notice about the Meeteetse Hotel on April 3, 1896 (Figure 3): “There is considerable talk about organizing the county, and it is expected that all things will be in readiness January 1, 1897. The new hotel, The Meeteetse House, is completed and will be opened for business during this week. It will be run by Mrs. Mary Corbett.”

Mary was not running the hotel for long. A November 15, 1902 advertisement showed E. Darr as the new proprietor (Figure 4). 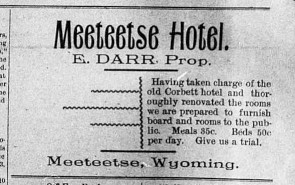 Advertisement in the Big Horn County News lists E. Darr as the new proprietor of the Meeteetse Hotel. 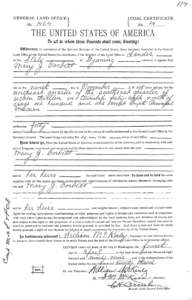 The second of Mary’s businesses may be a surprise. Mary owned a coal mine. She bought the land in April of 1899 (Figures 5 and 6). The land stayed with her through her marriage to Corbett, divorce, and remarriage to Edward Blake.

Figure 6. This map, courtesy of the BLM records, shows the location of Mary’s coal patent.

The first mention of the coal mine comes from the Big Horn County News on March 5, 1898 (Figure 7). Interestingly, this is before Mary Corbett owned the mine and there is no record of John Corbett owning the area before her. In 1902, one year after Mary’s marriage to Edward Blake, Edward was the proprietor of the mine (Figure 8). The advertisements for the mine stopped in 1903 at which point the mine seems to have closed, temporarily. 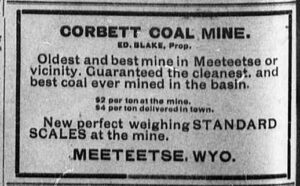 Figure 8. Ed Blake is listed as the proprietor of the Corbett Coal Mine in this advertisement published in the Big Horn County News on November 29, 1902. 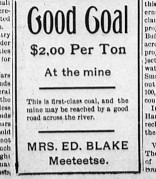 Figure 10. Newspaper clipping published on January 10, 1906 in the Big Horn County News mentions the reopening of Mary’s coal mine.

In 1906, the newspaper published that Mary, now known as Mrs. Ed Blake, reopened the mine (Figures 9 and 10 ). Perhaps not unrelated, Mary’s husband opened a blacksmith shop in 1905 (Figure 11). As a blacksmith, Edward would have been in need of coal for his forge (see our previous blog post and podcast episode on blacksmithing). Having a coal mine in the family would have been convenient to say the least.

Figure 11. Advertisement in the Big Horn County News published in August 1905 heralds Ed Blake as the proprietor of a new blacksmith shop in town. 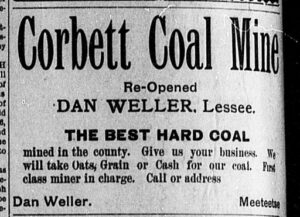 Later that same year, Mary leased the mine to Dan Weller, owner of the Weller Hotel (Figure 12). While Mary charged $2.00 per ton, Dan was willing to take cash or oats and grain. 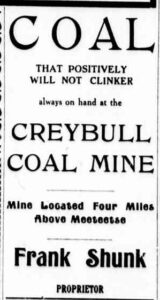 Figure 13. Advertisement for a coal mine four miles up the Greybull River appeared in The Meeteetse News on August 24, 1912.

Unfortunately, Mary’s death in 1908 coincides with a gap in digitized newspapers. However, in 1912, we find an advertisement for a Greybull Coal Mine (Figure 13)  which is 4 miles up the Greybull River above Meeteetse, approximately the same location as Mary’s mine. The mine is run by Frank Skunk who sold his interest in the mine in 1913 to J.R. Wilson. 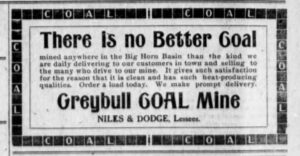 Figure 15. The Meeteetse News mentioned Elmer Dodge and Roy Niles re-opening the Corbett Coal Mine on November 17, 1916. Together with the advertisement for Niles & Dodge at the Greybull Coal Mine, we know that the Corbett Mine’s name was changed and her son worked the mine seven years after her death.

In 1915, Niles and Dodge were the leasees of the Greybull Coal Mine (Figure 14). As mentioned earlier, Niles was Mary’s last name before marrying John Corbett and the surname of her two boys, Roy and Earl. And then, in 1916 a notice appears in the paper that Roy Niles and Elmer Dodge are working on the old Corbett mine (Figure 15). We also find a notice that Roy’s stepfather, Ed Blake, works for Niles & Dodge at the mine (Figure 16). This is perhaps not surprising, as Roy and Earl Niles lived with Ed Blake after their mother’s death according to the 1910 Census.

Figure 16. Notice published in The Meeteetse News on January 19, 1917 puts Ed Blake working with or for his step-son.

The coal mine itself continued to be mined after this point although Roy Niles left the mine in the later part of 1917 to serve in World War I.  But this is the point where our story of Mary’s coal mine leaves off, with her son running the mine his mother purchased.

Be sure to read Part I of Women Proprietors in Early Meeteetse featuring Sylvia Mikkelson, found here.

For more information on women in business, listen to the third season of our podcast “Meeteetse Stories” episode 4. Found wherever you listen to podcasts.

To learn more about John Franklin Corbett, Mary’s third husband, stay tuned for an in-depth biography published here on our blog on May 31, 2022.

For more information on blacksmithing and coal, see our blog post here and listen to episode 1 of the third season of “Meeteetse Stories” found on Spotify, Podcasts.com, and wherever you listen to podcasts.