Women in the 19th century are typically not thought of in the world of business. Despite that way of thinking, Meeteetse has been home to many women-owned businesses from the start. Focusing on early Meeteetse, we are limiting the focus to two women in business: Sylvia Mikkelson and Mary Josephine Corbett. The posts have been divided into two and we begin with Sylvia Mikkelson. 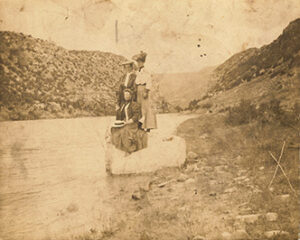 Sylvia was born in Pennsylvania to E.S. (Elnathan Sanderson) and Arminda Cheney in December 1868. The family lived in Conneaut, Pennsylvania next door to E.S.’ father, Eliphalet, where both E.S. and his father were engaged in farming. The families are found here on both the 1870 and 1880 Censuses (Figure 1 and 2).

Figure 1. 1880 Census shows Nathan (short for Elnathan), Sylvia’s father, and his family below her grandfather.

Figure 2. The 1870 Census E.S. Cheney and his family and, on line 9, Sylvia’s grandfather, Eliphalet.

In 1886, the Cheney family moved to Lander, Wyoming. The year before, in 1885, Sylvia’s grandfather passed away. It’s possible the family moved to be closer to E.S.’s brother, Ervin Franklin Cheney. A biography published on the first page of the Fremont Clipper on October 29, 1887 claimed that E.F. Cheney had been in Wyoming since 1869. 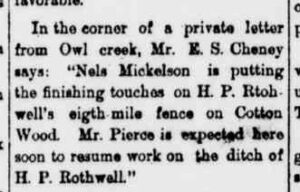 Figure 3. This article published in The Fremont Clipper on April 12, 1888 gives some insight into how Sylvia and Nels may have met.

In 1889, Sylvia Sylvia was married to Nels (Niels) Mikkelson (Mikkelsen). An article published in the Fremont Clipper gives some insight into how they may have met as it appears that Sylvia’s father was working with Mikkelson on Owl Creek (Figure 3).

Sylvia’s new husband was born in Skanderborg, Denmark in February 1862 to Jens and Ane Marie Mikkelsen. When he immigrated to the United States, the spelling of his name was changed from Niels Mikkelsen to Nels Mikkelson (and sometimes Mickelson).

Figure 4. Nels Mikkelson’s 1894 homestead on Cottonwood Creek at the base of the Owl Creek Mountains.

The couple appears to have lived on a claim at the base of the Owl Creek Mountains on Cottonwood Creek before moving to the Meeteetse-area (Figure 4).

Figure 5. Patent issued under the Homestead Act to Nels Mikkelson on December 4, 1901. 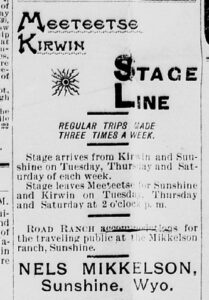 The 1900 Census places Sylvia and Nels at Sunshine, Wyoming. A patent in Nels Mikkelson’s name was issued on December 4, 1901 under the Homestead Act for property below Dick Creek up the Wood River (Figure 5). Newspaper advertisements from 1902 show Nels Mikkelson running the Meeteetse-Kirwin stage and offering accommodations to visitors at the Mikkelson ranch at Sunshine (Figure 6).

While Nels was running the stage line and doing some freighting, Sylvia ran a dry goods store in town. Advertisements like this one (Figure 7) appear regularly from 1898 until 1907. The Big Horn County News has only been digitized from March 5, 1898 – July 18, 1908 and the next paper, The Meeteetse News, is digitized from August 17, 1912 on so there is a chance Sylvia’s business lasted longer than nine years. A historic photograph (Figure 8) in the collection shows her dry goods store next to the Meeteetse Hotel, run by Mary Corbett who is mentioned later. 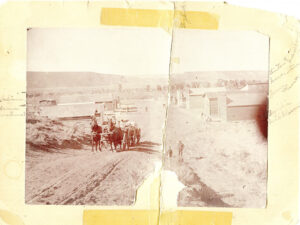 Figure 8. Photograph in the Meeteetse Museums collection has Sylvia Mikkelson’s name handwritten next to the Meeteetse Hotel (right side of image).

Figure 9. Excerpt from Sylvia Mikkelson’s obituary published in the Meeteetse News on September 20, 1918.

On the 1910 Census we find Nels and Sylvia separated, both listing their marital status as “Divorced.” That same year, Nels purchased land on Rawhide Creek while working up the Wood River as a hired hand. Despite this designation, upon Sylvia’s death, Nels accompanies her remains along with her father from Meeteetse to Lander (Figure 9).

Figure 11. Newspaper article published in The Big Horn County News on January 10, 1906 shows Sylvia building a house on her own claim.

On March 7, 1912, Sylvia was issued the patent on her own homestead (Figure 10). According to the Homestead Act, which the patent is under, she had to improve the land for five years before she could be issued the deed to the land (or the patent). A newspaper article published in The Big Horn County News on January 10, 1906, shows that she was living and making improvements on the land, such as her house, for more than the required five years (Figure 11). The following year advertisements for her dry goods store cease and by the 1910 Census we find her on the land with three boarders: Alva Alexander, Alva Alexander Jr., and Etta Alexander. Sylvia’s relationship to the Alexander family is unclear.

Figure 12. Sylvia Mikkelson sells her ranch to the Antlers Ranch, still in existence today. Notice published in The Meeteetse News on November 12, 1915.

Figure 13. The Meeteetse News reported Sylvia Mikkelson returned from Lander to Meeteetse after the winter on March 17, 1916.

Sylvia sold her ranch to the Antlers Ranch in 1915 and prepared to return to Lander (Figure 12). The visit lasted the winter and in March 1916, she returned to Meeteetse (Figure 13). In 1917 she visited her brother in Pennsylvania before returning once more to Meeteetse in January 1918.

Figure 14. Sylvia’s obituary, a tribute, was published in The Meeteetse News on September 20, 1918.

Unfortunately, after an operation to remove gallstones, Sylvia died in September 1918. Her obituary, published in The Meeteetse News on September 20, 1918 (Figure 14), stated that she was involved with the Baptist church during her lifetime. From newspaper clippings, we know Sylvia was also active in the Red Cross, where her contributions continued after her death (Figure 15).

Figure 15. The Meeteetse News published this notice on December 6, 1918 from which we know Sylvia’s contributions to the Red Cross continued after her death.

For more information on women in business, listen to the third season of our podcast “Meeteetse Stories” episode 4. Found on Spotify, Podcasts.com, and wherever you listen to podcasts.