You likely know that aviatrix Amelia Earhart visited the Double Dee Guest Ranch and was having a cabin built for her at Kirwin before her disappearance in 1937. You also likely know (or can guess) that there are a lot of memorials to her. But did you know there’s one for her right here in Meeteetse?

The stone memorial at the edge of the highway heading to Cody was spearheaded by Amelia’s friend, Carl Dunrud, in the late 1960s and early 1970s. He had been interested in such a memorial for several years but his original plan to put the memorial up at Kirwin was affected by the mining situation. In a September 1970 letter to the Wyoming Historical Society, Carl wrote “I discontinued this drive at the time, because of exploration for mineral on the narrow mountain road leading to the site. Now that the road situation will be taken care of by the time the memorial is built, i [sic] have again gone to work on the project.” 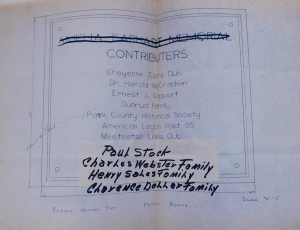 Blueprint of the list of contributors for the Earhart memorial.

Progress for the memorial began in 1968, although not as much as he had hoped, and things were finally gearing up with plans and funding by 1970-71. Carl had even taken out a permit with the Forest Service when he thought the memorial would be up at Kirwin, taking it out in his family’s name since they had adjoining land and “we will have a deep interest in this project, because Amelia was a close friend to our family and we are contributing, financially towards the construction” (Sept 1970, letter to the Wyoming Historical Society).

After much deliberation between Carl and his main partners (including the Cheyenne Zonta Chapter, Dr. Harold McCracken, and Ned Frost), they decided that Meeteetse and a spot on the highway would be the best place for it. In a January 1971 letter to Ned Frost at the Wyoming Recreation Commission (who had agreed to maintain and police the memorial after construction), Carl explained the decision on the move: “We think it should be built in Meeteetse, where it can be appreciated every day of the year, instead of just six months out of the year…Ninety percent of the donors have been contacted and are in favor of the Meeteetse location.” Although a park in Meeteetse was raised as a possibility, a spot along the highway was eventually chosen so it would be on the main stretch for visitors. 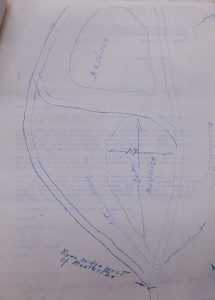 Hand-drawn plans of the location for the memorial.

Carl approached the District 5 (Basin) Engineer, George A Brown Jr., for the highway department’s permission to construct the memorial at an agreed-upon spot. The highway department agreed and even decided to help build a small parking area on the service road for visitors. Estimates were received by several businesses, but the Amelia Earhart Memorial Fund eventually chose Cody’s Ellis Construction Company to build the memorial base and Billings Monument Company for the plaques. The fund raised about half of the approximately $1100 needed, and the Wyoming Recreation Commission helped get a grant for the other half.

Carl frequently mentioned in letters to donors and officials the need for a memorial to Amelia in Wyoming and the area so her story here was not forgotten. In January 1971, Carl wrote to Ned Frost that “Unless we build a shrine to her memory, soon there will only be a rotten pile of wood where she chose to build her cabin.” Later that year in May, Carl wrote to the Lions Club that “I think the State of Wyoming should be proud that this lady chose this area to build her summer home. Unless we build a memorial to her, soon there will only be a pile of rotten wood at Kirwin where she wanted to build her cabin, to remember her by.” Over a year later, in the dedication invites in 1972, Carl reminded the invitees that “Soon there wouldent [sic] have been anything but a pile of rotton wood, to remember Amelia by, if the community had not erected a memorial to her.”

Meanwhile, Carl had to be emphatic that he was doing this for his late friend and not his personal gratification or to bolster business. In a letter dated December 19, 1968 to Mrs. Mary Reed Rogers at the Wyoming State Library, Carl declared “It was also mentioned in correspondence that was 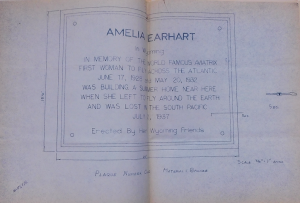 Blueprint of the text for the plaque on the memorial.

returned to me that, I, had Dude Ranch here, and was doing this to bolster my business. This is not true. We have been out of business for fifteen years, and doing it because we loved the grand person.” A few years later in 1971, he reiterated in a letter to the Lions Club that “My part in this matter is only to get the thing on the road. I want the community to have the credit for the construction.”

The plaques were ordered in the fall of 1971 and picked up by Carl in November. The organizers waited for spring’s warmer weather before actually doing any construction. After the memorial’s construction, the highway department finished landscaping and black-topping the parking area in the late summer. The dedication occurred on Sunday, September 24, 1972 at 2pm. Another area friend of Amelia’s, Dr. Harold McCracken from the Buffalo Bill (and also a major donor and partner), was asked to be one of the speakers, as was another friend, aviatrix, and partner in the project, Lucille M Wright from New York.

Were you at the memorial’s dedication? Let us know!